The lights go down, the monotone pop music fades and around the world millions of Apple worshippers cling to their seats. This is an event which only comes about once a year. An event where the most successful tech company in the world shows off their newest products in what is always a world class (although extremely long) keynote. Luckily for you we have watched it and condensed all the important information into this article. Here is everything you need to know about Apple’s Autumn 2015 keynote:

The iPhone 6s and 6s Plus


For the first time the new iPhones will come in a new colour: Rose Gold. In my opinion: the new colour is hideous, but the colour was introduced to appeal to Chinese markets.

The new iPhones will implement “3D touch”, allowing the user to use more or less pressure to do different actions. For example, in Mail: you can now lightly touch the screen to “peek” at the content of the email, and press harder if you want to read the full email.

The new iPhone has the new A9 chip, making it 70% faster at CPU tasks, and 90% faster at graphics tasks. This new graphics performance means that new iPhones will perform brilliantly when playing graphics-intensive games, such as the new FreeBlade:

Importantly, Apple have added a flash for the front-facing 5 megapixel camera (which will allow your drunken night-time selfies at Poste to really shine.) The new iPhone camera also has 50% more pixels, bumping the camera’s quality to 12 megapixels. They’ve implemented new technologies to mightily improve iPhone camera quality. It’s difficult to demonstrate the beautiful images Tim Cook showed at the event, but they are extraordinary. It can also film in 4k resolution, for the first time.

Other new thingies for the 6s: 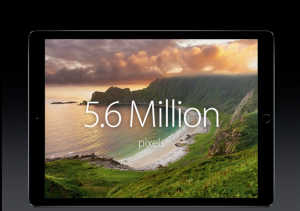 The new iPad Pro is impressive. With a 12.9 inch screen and 5.6 million pixels the screen will look incredible and be great for movie watching and graphic design. Coupled with 4 speakers instead of the normal 1 that comes in all the previous iPads this is likely to be extremely popular with anyone who consumes or creates a lot of content and art. 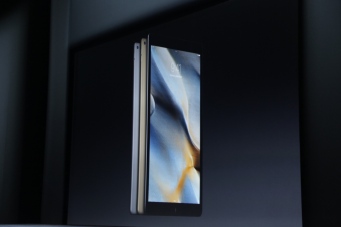 In terms of design, Apple have stuck to their guns and gone for the symbolic unibody aluminium design in their usual three colours: Silver, gold and space grey.

Apple’s new stylus isn’t an iffy plastic stick that always presses the wrong button. It’ll be a useful tool for artists in graphical design, as it is so accurate it can pick out individual pixels and has an extremely low latency so it will be as close to a real writing/drawing experience as possible.

Some customers might be dissuaded by the $99 price tag, though:


Apple finally updated their apple TV with a new app store, layout and remote. Although it will be slightly more expensive than their current Apple TV it is likely to be a huge hit with a much improved user interface and opportunities for apps to take full advantage of a flatscreen TV.

Jokes aside, Apple utterly failed in proving the new product’s gaming potential. The gameplay was basic and awkwardly staged, and the audience’s disappointment was shown by a distinct lack of clapping.

One Republic performed (instead of One Direction, thank the lord), starting with “Counting Stars” totally out-of-tune, followed by sucking up to Tim Cook by playing a song dedicated to him, and finally concluding by absolutely ruining M83’s “Midnight City”. Half the audience had left the room by the end of the performance.

Overall an unforgivable performance by One Republic was made up for by Apple’s exciting new releases.