Our rugby team has always been an outstanding team. With a flawless season last year and hopefully a near flawless season this year. With around eight players graduating from the year before I thought that the team would be crippled. With twenty four players for this season we are anything but crippled.

With a rather busy schedule for the rest of the year with tournaments and trips spread out over the next couple of weeks before the December holidays. Below are reviews of this years matches so far by multiple members of the team.

First Match of the Season – La Chat vs ISZL

Very good performance from our senior rugby team in their first match against ISZL at home. It was a tough match, since our best player from last year, Jay Williams, betrayed us by playing for the other team as they were missing a player. He scored three tries for them. However that did not stop us from winning, even though Jacob Waqanivalu popped out his shoulder once, after putting it back, popped it out a second time and was sent of to the hospital. 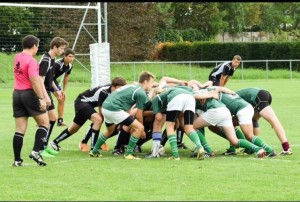 The second match of the season for the La Chat rugby team, and the second win.

After a long train journey to Zurich the team started strong. Ben Loeffen Gallagher scored in the first minute of the game, beating the defence line and running in from 40 metres. Sadly Ben didn’t convert the try. However only a few minutes later the captain Will Alabaster scored a second try for La Chat, leaving La Chat with a 10-0 lead. The team seemed to lose focus up until half time, conceding three tries to Zurich International School. This meant that at half time La Chat were 17-10 down, with no subs things weren’t looking too promising for the Hawks.

However the boys weren’t done yet, as Mateo Suar out-paced the whole of the Zurich team to run in a try from over the halfway line. Soon after Ben Loeffen Gallagher scored another try to put La Chat ahead 20-17. ZIS hadn’t given up yet, they managed to hit back and take the lead again. But a final effort from new player Jack Goldie finished them off, and this time a conversion from Ben Loeffen Gallagher to make it 27-22.

This definitely wasn’t an easy match for the team, however solid defending at key moments won the game for La Chat. With no subs the boys had to undertake immense pressure and physical strain, but they were not going to give up that easily. Another impressive performance to beat their hosts ZIS. Despite the injuries of some key players, the team held together well and the new players made a good start to their rugby careers. 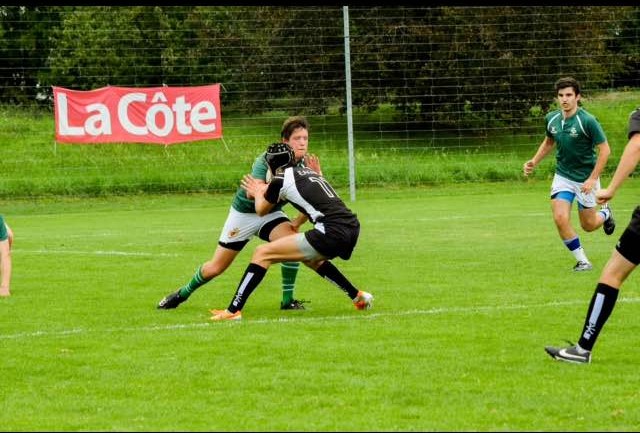 Last year’s convincing victory was in our minds as we arrived at the Colovray stadium. We knew we could win. However, arriving late, with only five minutes to warm up was the first of many problems. In recent matches we had suffered some heavy injuries and we had a number of new, inexperienced players having their first match. The game started well for La Chat and within a few minutes we had our first try. Unfortunately for us, our kicker was having a bad day and he promptly hit the post and missed the conversion. Dominating in attack made up for our lacking defence and we scored a second try from a stolen line out at their five meter line – unfortunately another missed conversion.

The backs then put us even further in the lead with another try. Then our confidence got the better of us and they scored their first try just before half time, which they promptly converted. The second half started well for us with another try  but unfortunately for us we conceded unlucky penalties and CDL`s more experienced runners got around our defence, with a second converted try. Despite being close to a try we never quite managed to put it down and CDL got a try down in the last action. With the score at 20:19 the pressure ramped up as the CDL kicker took the conversion, which he closely missed, give La Chat a close victory.

On the 25th of September the La Chat Rugby team started their journey to Zuoz to take part in the Zuoz Rugby Tournament. We take part in the tournament annually. I know what you’re thinking, where is Zuoz? Zuoz is in the canton of Engadin, very close to the alluring ski resort St Moritz.

Leaving La Chataigneraie at quarter past one into Nyon to nab the 1:47 to Lausanne. Because of some confusion we were delayed for an hour. We made use of the delay to stock up on food and beverages in Denner before rushing off to McDonalds.

After a long six hour train ride, the whole team fatigued, we arrived in Zuoz and a short walk later, showed up at our hotel: Hotel Engadin. After unpacking we progressed onto a steakhouse, the very same that the rugby team visited last year. With full stomachs and spirits running high we headed back to the hotel for a good night’s sleep, well as good as possible with fifteen lads in one place.

A half eight start on a crisp Saturday morning with four big games ahead of us. With breakfast finished the team headed down to the pitch where we would later play four, half an hour games. After warming up with so stretching and some drills, we waited pitchside and watched the other teams play until our time came.

As these games were our last with our inspiring, exceptional coach Carl Williams, we promised to play our games to our max. Playing at one thousand seven hundred metres was taking a toll on our performance. Running fifty metres would normally be an easy task, but at altitude it was arduous. With a limited fifteen players we would play fifteen a side which meant we had no subs.

Playing Leysin for our first game around eleven o’clock we were ready for our first Hetze (war cry). We walked into the centre of the pitch and waited for Leysin’s pathetic ritual we fired back with our much superior cry. Starting the game strong punching through the defence we scored a total of six tries with four converted by our excellent kicker Ben Burrows. Finishing the game with a thirty eight to zero – La Chat domination.

After a half hour turn around we went back onto the pitch to play Zurich. Zurich punched through our defense to score one try but with no conversion. We quickly fought back with a try of our own converted by Ben Burrows again. After our main player, Michael Dullaghan, was shipped off to hospital with an ankle lesion we let through another try from Zurich. Stealing the win, Zurich triumphed over us by ten to seven.

With a much appreciated break of an hour and a half, we ran off to the local Co-op for a lunch stop. At one o’clock we were matched off against Munich who exhibited the least sportsmanship of all of the teams present. 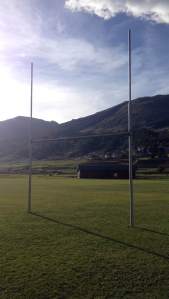 Sliding two converted tries before our prop Joseph Watson was sent off after being kicked in the chest and retorted with the everlasting threat off “I will end you!”. While Joseph Watson was off Munich took advantage and flew a converted try of their own. An example of their lack of good faith a two or three second late tackle, witnessed by myself, was made on Sam Barzdo and the second famous line from the trip erupted from Sam’s mouth “Are you on acid or something mate?!”. Flying through Munich defense once again we obtained another converted try. And then a penalty to finish the game twenty four to seven.

Playing Zuoz was always going to be a rough game to win. A great player short and playing our last gamer for Carl. Zuoz were in possession of a very quick, very big inside centre who scored their first try after powering down the middle. We named him ‘Henchy’. Henchy was passed the ball  again and was powering down the wing until our pacey Full Back, Matteo Suar sprinted after him to take him down. After this incident we managed to shut down Henchy and score one of our own tries, converted once again by Ben Burrows with a personal haul of twenty six points. Sadly we let through the last try which would ruin our chances of winning the tournament and losing the game twelve to seven.

We arrived in second place tied with Zuoz International School. Michael Dullaghan came down to meet us on the pitch on crutches with a possible ankle lesion. Back up the hill to our hotel to get ready for dinner hosted by Zuoz. We returned to our hotel to finish of the Samoa v South Africa World Cup match. After Samoa was defeated we progressed onto the local pub to watch Wales v England and we were hoping for the correct score until Wales bettered England and took the win twenty eight to twenty five. We left the pub around midnight and discussed some great philosophy in a hotel room which went on way into the morning. Each of us returned to our respective rooms to enjoy a good night’s sleep before waking up and taking the train home at ten o’clock. Turning up at four ish at our departure point in Nyon I rushed home to watch Scotland demolish America.

I play rugby and then I write about it. View all posts by hartleymatthew