On the thirty first of October at Colovray sports centre, Nyon, La Chat hosted a rugby tournament, welcoming International schools of Zurich, Zug/Lucerne and CDL. With a ten thirty start the air was dry but cold, no hint of the sun showing his head anytime soon. Looking at a total of three games later on we knew we would have a challenging but entertaining day ahead of us. A total of sixteen players, seventeen later on, we were playing with one sub.

Opening the event, our first game was against CDL. Considering our track record against CDL, which was that we were always victorious, and the close call we had only a couple weeks before, taking the win by one point. We knew we would have to put our all into this game. Captain Will Alabaster brandishing the Bassy handoff stormed through the CDL defensive line for two tries in total. Our kicker Ben Burrows converting one we saw ourselves on the winning side of the game.

After watching ISZL beat ZIS we instantly realized that ISZL were the team to triumph over for the overall win. Starting off the game both squads were evenly matched. Neither side has possession of the ball for any amount of time. 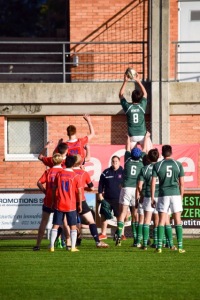 Playing within our twenty two we made an error allowing ISZL to slide a try through our line to make it seven to zero. Playing the rest of the game within our half, ISZL took advantage of a penalty and gained another three points, ending the game at ten to zero.

We finished the tournament playing Zurich International School. Coming out from a loss we were faced with second or third place. We knew that Zurich would be a tough match but we knew we could win. Opening the game and playing mainly in Zurich’s twenty two. A turnover ball saw Ben Burrows blast over the try line for five points. The rest of the first half was played within our twenty two. Due to exquisite play and huge tackles we kept Zurich at bay, not missing any tackles for five minutes of arduous play as Zurich kept trying to break our team. The majority of the second half almost cloned the end of the first. Again we found ourselves playing on our try line. Zurich could not find any single hole in our defense. We were impenetrable, no matter how hard Zurich tried we smashed them back harder, never has a finer La Chat defence been witnessed. Ending the game, we were on top by five points. The same five points scored by our number nine.

A special thanks from me to my very own parents, Jo and Adam Hartley, for keeping all the teams fed along with all the mums who brought cakes along. Also thank you for everyone who came to support La Chat (especially to Oscar Ogilvie who battled through his tummy ache to come to watch us play), further spectators are always appreciated. With more and more of our team injured we have had to cancel a few games. An impending trip to Zurich was cancelled and also a trip to Zug has been cancelled. But no need to worry, we have a match this Wednesday and will be sure to keep you updated on our future successes. We’d also like to congratulate ISZL for their fantastic performance and sportsmanship on the day.

La Chat Rugby would also like to take this opportunity, as it is the 11th of November, to voice our support and gratitude to all of those who have lost their lives or sustained injury in the defense of the values that we all hold so dear. Our thanks go out to you.

I play rugby and then I write about it. View all posts by hartleymatthew