1. Palestinians take part in a protest demanding the release of prisoners in Israeli jails in Gaza, Palestine. 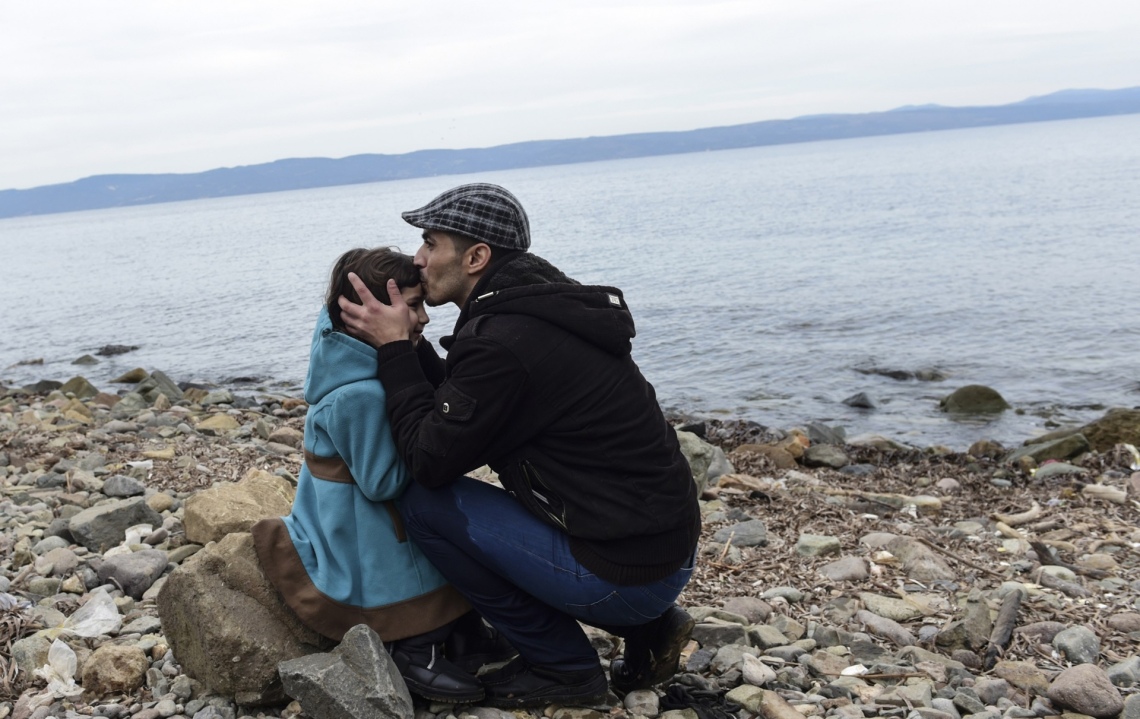 2. A Syrian man kisses his daughter as they arrive safely on the island after crossing the Aegean Sea from Turkey.

3. People attend a candlelight vigil on Piazza San Marco to remember Italian Valeria Solesin, who died during the Paris attacks in Venice, Italy.

4. A pedestrian passes graffiti honouring the victims of the Paris terrorist attacks in Prague, Czech Republic. 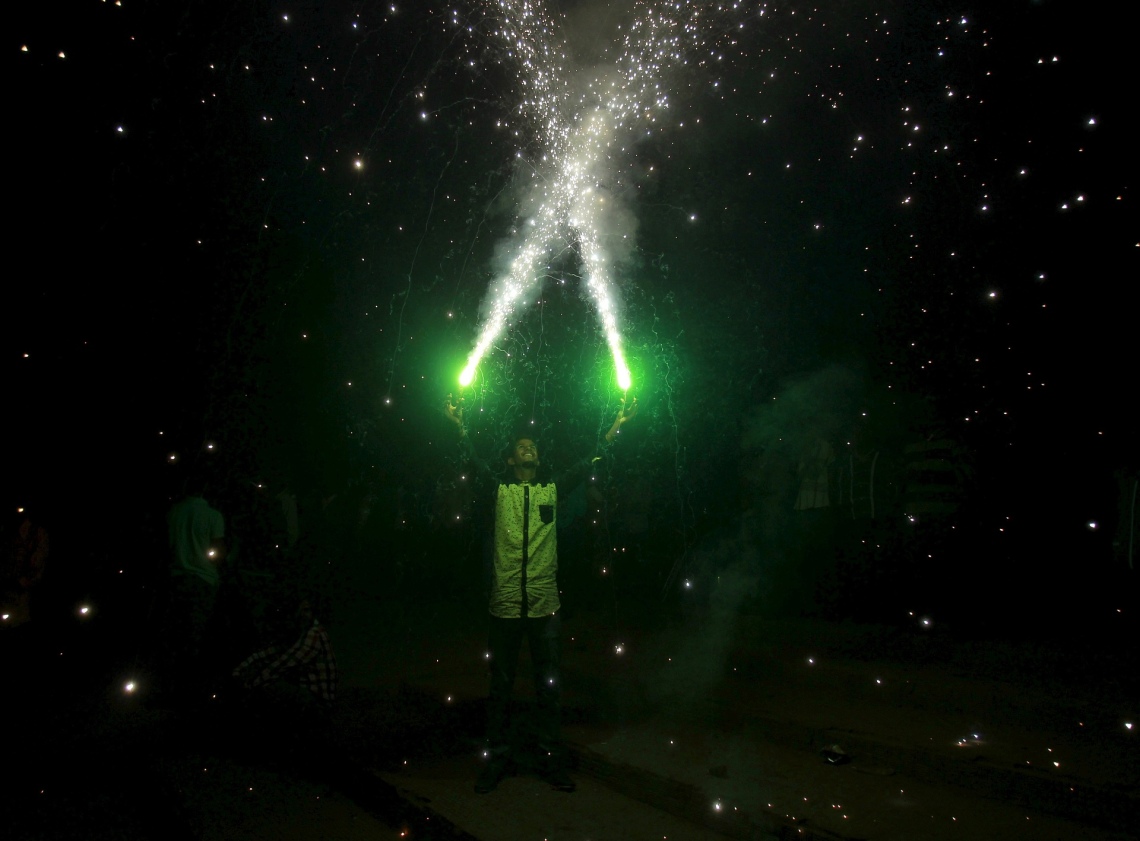 5. A youth lights firecrackers while celebrating the Hindu religious festival of Chhath in Agartala, India.

6. A Colombian fan readies himself for the World Cup qualifying match with Argentina in Barranquilla, Colombia. 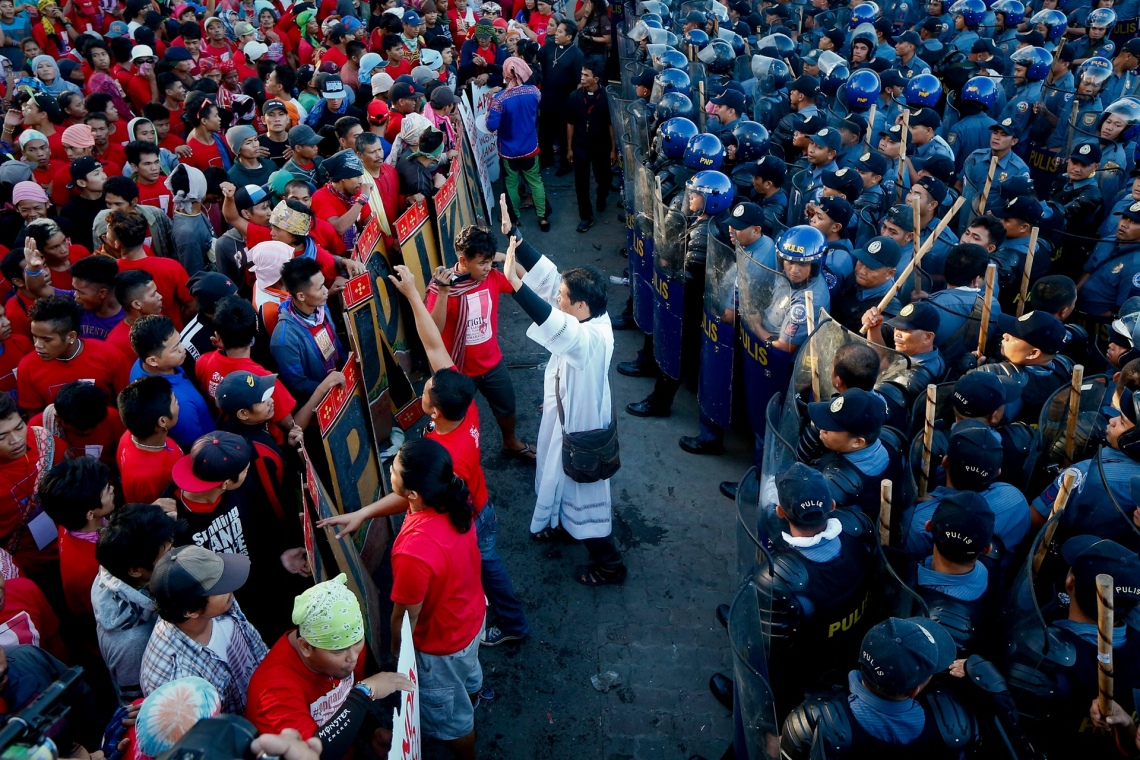 7. A priest intervenes to appease indigenous Lumad people as they clash with riot police during a protest against the Asia-Pacific Economic Cooperation summit in Manila, Philippines.

8. People light candles before releasing homemade paper lanterns into the sky during an annual festival in Taunggyi, Myanmar.

9. A large crowd gathers to lay flowers and candles in front of Le Carillon restaurant in Paris. The Islamic State group claimed responsibility for Friday’s attacks on a stadium, a concert hall, and Paris cafes, that left more than 120 people dead and over 350 wounded.

10. A Palestinian woman cries as she watches mourners carry the body of 21-year-old Laith Manasrah, during his funeral at the Qalandia refugee camp, near the West Bank city of Ramallah. Two Palestinians were killed by members of the Israeli armed forces during an operation in the camp to demolish the home of Mohammed Abu Shahin, accused of killing an Israeli hiker in June 2015.

11. A man hugs his daughter and son as migrants and refugees arrive on the Greek island of Lesbos after crossing the Aegean Sea from Turkey.

12. A woman lights a candle in a group of candles spelling the word humanity, Saturday during a candlelight vigil in support of the victims of the deadly Paris attacks and Beirut bombings at the Islamic Center of America.

13. Greek riot police officers scuffle with a protester during a demonstration by farmers outside the Greek parliament in Athens on November 18. Thousands of farmers clashed with police while protesting over planned tax and pension reforms demanded by the country’s bailout creditors.

14. A message that reads: “In the name of what?” and a rose is placed through a bullet hole in a window of the Rue de Charonne restaurant in Paris. 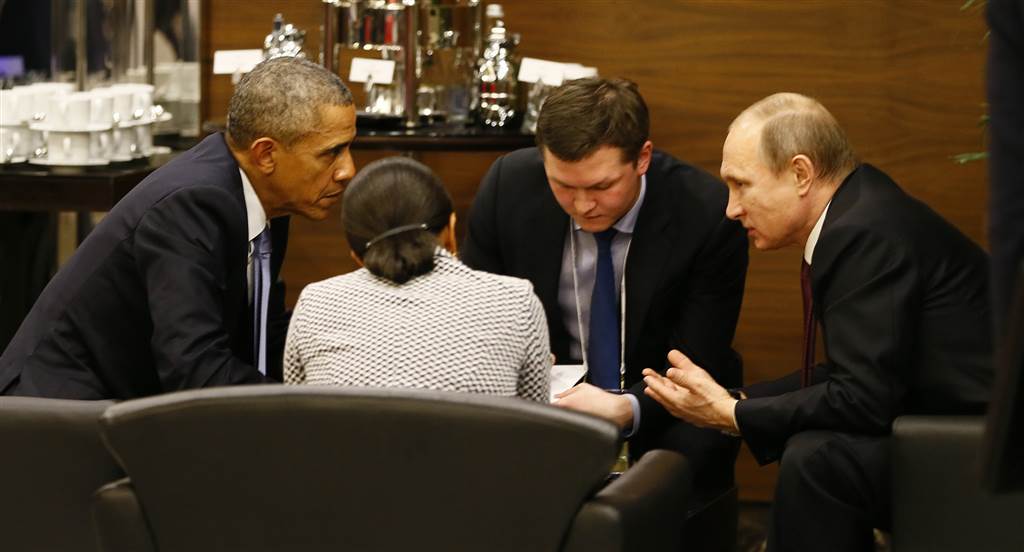 15. U.S. President Barack Obama speaks with Russian President Vladimir Putin prior to the opening session of the G-20 summit in Antalya, Turkey.

16. A woman wearing Tibetan traditional costume gets ready for her wedding photo to be taken at the Nianqing Tanggula mountain pass in Tibet, China.