“Slender Man” was originally a fictional character that was made up for an online Photoshop competition in 2009. Eventually, it gained a lot of fame and a lot of fan fiction was written about him. As his fan base grew, he became one of the scariest urban legends. He is often depicted stalking children and hiding in the woods. 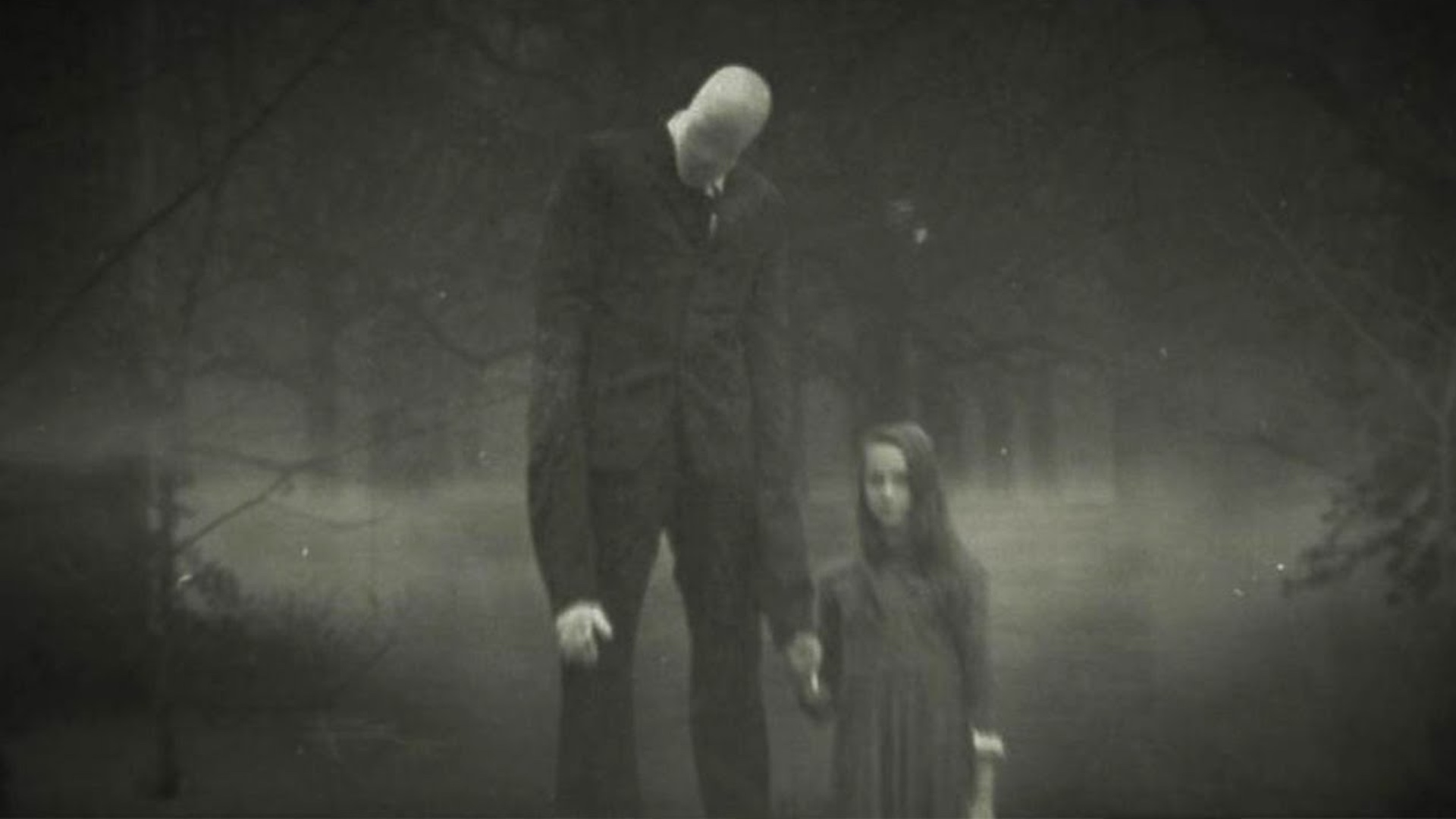 Anissa Weier, Morgan Greyser and Payton Leutner all attended the same school and were all 12 years-old. Anissa and Morgan discovered Slender Man on a website and believed he was real. They claimed that they wanted to become his servants, live in his mansion and protect their families. They thought that the way to do this would be to prove their loyalty by killing someone, a way of appeasing Slender Man. They were even described as feeling slightly guilty for stabbing their friend but that they thought that it was the only way.

On the 31st of May 2014, the three girls were playing hide-and-seek in a forest when the attack occurred. Payton was held down and stabbed 19 times with a kitchen knife. They missed her heart by a millimeter and two of her major arteries were damaged. Payton managed to crawl to a nearby road where she was found by a passing cyclist. She was brought to the hospital and survived whilst Morgan and Anissa were arrested.

Anissa and Morgan were both sentenced to treatment in a psychiatric facility and indeterminate sentences which involved three years of locked confinement: Morgan receiving 40-years-to-life and Anissa 25-years-to-life.

Edward Gein was an American serial killer who lived from 1906 to 1984. He confessed to killing two women, Mary Hogan and Bernice Worden, but was known to dig up corpses and create furniture using their skin and bones.

Edward’s family consisted of his parents, Augusta and George Gein, and his older brother, Henry. He became very isolated after the family bought their farm in Plainfield, Wisconsin as his mother only let him leave the farm to attend school and punished him if he tried to make friends. His old classmates and teachers described him as shy and strange, laughing to himself randomly.

In 1940, his father died of heart failure caused by his alcoholism and in 1944, his brother died in a fire near the family’s farm (it has been speculated that Ed was responsible for his brother’s death). But the most devastating death to Gein was his mother’s in 1945 as he idolized her, so much so that he set up shrines for her around his farm, even though she regularly verbally abused him. After her death, he became a virtual hermit.

He was found guilty of killing two women. His supposedly first murder was that of Bernice Worden, the owner of a hardware store in Plainfield. She was reported missing on November 16th, 1957. As Gein was the store’s most recent customer, he became a suspect and upon searching his home the police found Bernice’s decapitated and severely mutilated body along with many different body parts such as skulls (which he hung on his bedpost and made bowls out of), that Gein had taken from corpses that he exhumed from a nearby graveyard.

Supposedly, the women he took these parts from resembled his mother and he even stated that after her death he wanted to create a “woman suit” so he could “become his mother to literally crawl into her skin”. In later questioning, he admitted shooting Mary Hogan whose head was found in his house.

He was found mentally incompetent and hence unfit for trial. He was sent to a maximum security facility in 1957, the Central State Hospital for the Criminally Insane and later to the Mendota State Hospital where he died of respiratory failure caused by his lung cancer in 1984.

Silence of the Lambs, Psycho, and The Texas Chainsaw Massacre are all inspired by Ed Gein, so just remember when you’re watching them and trying to reassure yourself about the unlikeliness of these scenarios actually happening, they did.

The Axeman of New Orleans

The notorious Axeman of New Orleans was a mysterious serial killer who killed six people and injured twelve. You might have heard of him from Buzzfeed or other platforms that have brought attention to him and made him into a terrifying legend, and if you haven’t, just the name should give you the chills. So what happened in New Orleans between May 1918 and October 1919? Who is the Axeman?

His first attack occurred on the night of the 22nd of May 1918. He murdered Catherine and Joseph Maggio by slitting their throats with a razor and then bashed their heads with an ax before leaving. Catherine died almost immediately as she was partially decapitated by the initial incision to her neck.

However, Joseph lived long enough to be discovered by his brothers, Jake and Andrew, after Andrew, who lived next door, heard suspicious noises. Later in the investigation, the razor was found to come from Andrew’s barber shop. Unsurprisingly, Andrew was the prime suspect in the investigation until the police released him after their failure to find flaws in his statement.

His second attack left the victims alive. Harriet Lowe and Louis Besumer were both struck in the head with a hatchet in the early morning hours of the 27th of June 1918. They survived the attack although Lowe’s face was partially paralyzed due to the attack. Many speculations were made, including statements from Harriet Lowe saying that Louis Besumer was a German spy and had attacked her. As she regularly contradicted herself, her statements were considered to be delirious.

The next attack was to Anna Schneider, a heavily pregnant 28-year-old who woke up in the middle of the night to find a figure standing over her and was repeatedly bashed in the head with what the police thought to be a lamp. She survived and gave birth days later. This was the first time that the police suggested a link between this attack and the two previously mentioned cases.

The next victim was Joseph Romano. He was discovered by his nieces after having suffered from serious head injuries caused by an ax, which was found in the backyard next to the chiseled back door. Romano died days later from his injuries.

A trademark of the Axeman was found when the Cortimiglia family was attacked. Rosie and Charles Cortimiglia were found bleeding out next to their deceased daughter’s body, from severe head injuries caused by an ax which was found on their back porch next to their chiseled back door.

Steve Boca was also attacked by an axe-wielding intruder during the night of August 10th 1919. He recovered from his injuries but could not remember the attack. Once again his back door was found chiseled off.

The Axeman’s last murder was on the night of October 27th 1919. The wife of Mike Pepitone woke up to find her husband with various head injuries, his blood covering the entirety of the room and an axe-wielding man fleeing their house.

No motive or specific “type” were found as he attacked varieties of people and never robbed the houses. The Axeman became a mysterious and notorious figure throughout history for his particularly violent method of killing. The police of Louisiana investigated extensively the axeman’s identity and brought in many suspects. The Axeman even taunted them by sending a newspaper this letter (between the Cortimiglia and Boca attacks):

They have never caught me and they never will. They have never seen me, for I am invisible, even as the ether that surrounds your earth. I am not a human being, but a spirit and a demon from the hottest hell. I am what you Orleanians and your foolish police call the Axeman.

When I see fit, I shall come and claim other victims. I alone know whom they shall be. I shall leave no clue except my bloody axe, besmeared with blood and brains of he whom I have sent below to keep me company.

If you wish you may tell the police to be careful not to rile me. Of course, I am a reasonable spirit. I take no offense at the way they have conducted their investigations in the past. In fact, they have been so utterly stupid as to not only amuse me, but His Satanic Majesty, Francis Josef, etc. But tell them to beware.

Let them not try to discover what I am, for it were better that they were never born than to incur the wrath of the Axeman. I don’t think there is any need of such a warning, for I feel sure the police will always dodge me, as they have in the past. They are wise and know how to keep away from all harm.

Undoubtedly, you Orleanians think of me as a most horrible murderer, which I am, but I could be much worse if I wanted to. If I wished, I could pay a visit to your city every night. At will I could slay thousands of your best citizens (and the worst), for I am in close relationship with the Angel of Death.

Now, to be exact, at 12:15 (earthly time) on next Tuesday night, I am going to pass over New Orleans. In my infinite mercy, I am going to make a little proposition to you people. Here it is:

I am very fond of jazz music, and I swear by all the devils in the nether regions that every person shall be spared in whose home a jazz band is in full swing at the time I have just mentioned.

If everyone has a jazz band going, well, then, so much the better for you people. One thing is certain and that is that some of your people who do not jazz it out on that specific Tuesday night (if there be any) will get the axe.

Well, as I am cold and crave the warmth of my native Tartarus, and it is about time I leave your earthly home, I will cease my discourse. Hoping that thou wilt publish this, that it may go well with thee, I have been, am and will be the worst spirit that ever existed either in fact or realm of fancy.

To this day his identity remains unknown. He suddenly stopped his killing spree in 1919, never to be heard of again.

So there you have it; the most chilling real-life murder cases that will definitely stop you from sleeping tonight.