This article is a part of a series on The Update, devoted to famous people you’ve never heard about. This post is about Nikola Tesla! 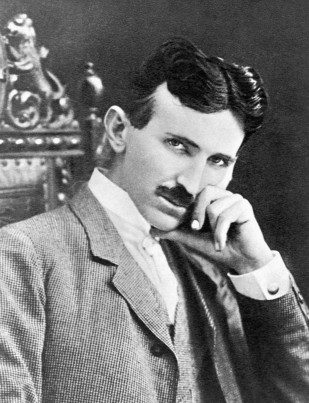 In 10 words:  Pioneer, engineer, one of the greatest minds of the century.

His deal: Nikola Tesla is one of those inventors whose name we know, but whose inventions we are not necessarily familiar with (with the exception of the homonymous Tesla coil). With a car brand, an airport, and an SI unit named after him, Tesla was undoubtedly a genius of electrical engineering. Not only was he a genius but through his work he became a hugely influential figure; voted to be even more so than Karl Marx, the father of Communism.

Nikola Tesla was rebellious by nature. He worked for Thomas Edison where he designed and made improvements to Edison’s inventions. He quickly moved on to solving more difficult problems. Tesla told Edison he could increase the efficiency of Edison’s prototypical dynamos. The two had a bet and Tesla was under the impression that if he won Edison would give him $50,000. Edison later claimed that it was just ‘joke’. Tesla quit. In 1886, Tesla found two investors interested in working with him. However, they wanted him to work on improved arc lighting instead of electrical motors. After he was forced out of this venture Tesla worked at several small low paying jobs. Despite this,Tesla went on to do some of his most influential work. After creating the Tesla Electric Company, Tesla started working on motors using alternating current and finalised the induction motor. George Westinghouse, president of the Westinghouse Electric and Manufacturing Company, secured a licensing deal with Tesla’s associates for $60,000 and paid $2.50 per horsepower produced by the motors as well as hiring Tesla as a consultant for a year for $2,000 (approximately $52,000 in today’s money). Westinghouse and Tesla were in direct competition with Thomas Edison. This was later known as the War of Currents. The war ended when Edison lost control of his company, which later became General Electric and adopted AC.

Tesla spent his later years working on x-rays and high-voltage experiments. In 1915, he was the subject of a rumour that he and Edison were to be awarded the Nobel Prize in Physics. Tesla died in a hotel room in 1943 and the FBI took custody of all of his belongings before sending them back to Europe.

Things he hopes we don’t remember

Last Words: Unfortunately, no one was with him when he died in room 3327 of the New Yorker Hotel.

View all posts by ferroalberto